I would like to wish everyone a wonderful 2016 and every success in navigating what should be another challenging year ahead in terms of making some prudent investment decisions given the somewhat uncertain global macro-economic backdrop that we are faced with.

If I look at the newsletter I sent out at this time last year and the predictions for the year just passed, I think the only outcomes that were unforeseen, were the extent of the continued increases in property values in both Sydney and Melbourne. From a global perspective, similar themes that existed in 2015 will continue this year with the main change being the long anticipated lift off in the Fed Funds Rate and the likelihood of a further three or more such increases during the course of 2016.
The other main concern, especially for Australia and with a direct impact on the Australian property market is China, which, as everyone is aware is Australia’s major trading partner, however, the IMF forecasts suggest that China’s GDP growth could slow in percentage terms over the coming years (from double-digit rates to still rapid high single-digit rates.) and that US growth could pick up, but it still expects China to be the single largest contributor to global GDP growth in USD terms over the coming five years. Also, China’s economy is now much larger than it was when it sustained double-digit growth rates, which makes it harder to grow as quickly as it did and means that even high single digit growth rates deliver significant additions to global demand.

China’s growth is expected to have slowed to around 7% in 2015 from 10.6% in 2010, but because China is a lot larger than it was in 2010 (89% larger in USD terms and 69% larger in local currency terms) the IMF estimates that this year’s GDP growth is estimated to be equivalent to USD1,028 bn, which is slightly more than the addition to GDP in 2010 of USD 980 bn . More importantly, China’s recent Fifth Plenum, which included a significant focus on the 13th Five-Year Plan (2016-2020), saw policymakers set economic growth as a top priority. Policymakers reiterated the goal of “doubling GDP and people’s income by 2020”, which implies a minimum growth rate of around 6.5% a year over the next five years which bodes well for the Australian economy at least in the medium term although I expect this position to continue into the foreseeable future. The major risk that I can see facing the Chinese economy is the expansion that has occurring in their banking system over recent years and hence the potential for a large increase in bad debts if economic growth slows too much, which would then have a global impact.

What we as property investors need to always be mindful of is the likely interest rate environment and, as we saw in the last few months, the impact that regulatory pressures from the likes of APRA can have on both the cost and availability of bank funding to enable us to continue with our investment strategies. I think the RBA will have an even more difficult time in 2016 in terms of setting monetary policy to cope with the continuing decline in the mining sector of the economy, the resilience of the AUD and trying to manage the price growth of some of the nation’s property markets. We have seen the banks come to the aid of the RBA in terms of increasing borrowing rates out of cycle and I anticipate this could well be repeated during the year as they face more margin pressure and slowing lending growth. I am sceptical that the Banks will pass on any interest rate cuts if the RBA does cut the benchmark rate and I think the present scenario continues to favour longer term fixed rates from an investor’s viewpoint.

To summarise, I think the continuing decline in commodity prices, a strengthening USD and weakening AUD combined with a supportive monetary policy from the RBA should assist the Services and Tourism sectors of the Australian economy to continue to expand, which will be broadly supportive for the residential property market. This will continue to drive quite different outcomes for the property markets of the various states of Australia and we should see some easing in the growth rates for Sydney and Melbourne. We continue to favour Brisbane and in particular the inner middle ring ( 3 to 10 km from the CBD ) as being better placed to find value and scope for sustainable longer term growth.

We will continue to monitor all these factors over the year and share some insights along the way. 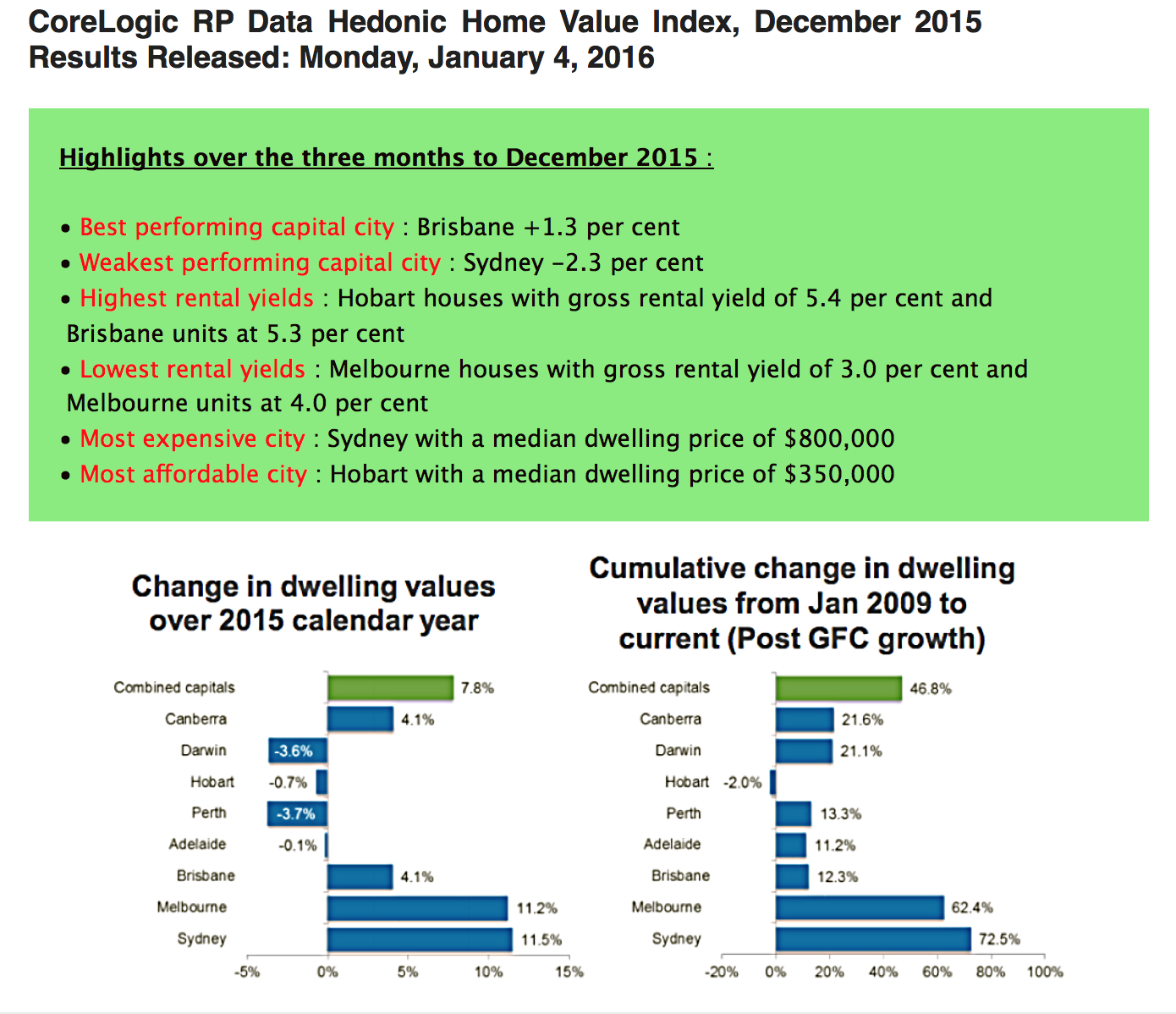 Analysis: Lending curbs around the world

It’s easy to think we’re the only ones being subjected to lending curbs. But APRA’s crackdown must be viewed in a global context.

With an ongoing discussion about APRA’s regulatory regime dominating the mortgage industry, it’s easy to get a touch of tunnel vision and think that we are the only country feeling the heat.

But the truth is that APRA’s approach, particularly around capital and responsible lending, is part of a broader effort by many nations to maintain financial stability.

Chinese hard landing ‘not off the table’

In terms of risks going into 2016, China should be “first and foremost” in investors’ minds – with the risk of a hard landing “still on the table”.

A roundtable discussion between the chief investment officers of Neuberger Berman singled out China as the key risk for investors in 2016.

Neuberger Berman multi-asset class CIO Erik Knutzen said the importance of China to global investment markets was evident by the market reaction to “marginal changes to Chinese growth at mid-year [2015]”, as well as the devaluation of the yuan.

“Our view is that China is slowing but that it is not going into a hard landing, and that it will continue to be a contributor to global growth on the margin,” Mr Knutzen said.