I thought it would be useful to add a little commentary to all the journalism relating a bubble in the Australian property market.

The AFR article below says prices could increase by up to 20% ………………………….. over the next years. Now if prices overall were to increase by 20% over the next year I think there would be some cause for concern, however, the Reserve Bank of Australia has in fact lowered interest rates to historic lows to actually try to stimulate the housing sector to take up some of the declines in the mining sector. Loans for new construction (the leading indicator of housing construction) increased by 1.8% to be 12.7% higher than a year ago. This is a welcome result given the slowing of momentum this component experienced over the past 6 months. That said, in September 2009 this measure was up over 80% year on year, while the level of activity was almost 40% higher than where it is currently. While we do not expect new construction loans to pick up as quickly in the current cycle, activity needs to accelerate considerably from here for housing investment to have a material contribution to growth in the year ahead.

This being the case, I think the RBA would like to housing continue to grow while using ongoing rhetoric to try to put some downward pressure on the persistently high Australian dollar, and we may in fact see some further interest rate cuts next year if required.

I have included a graph from an article about stock market bubbles as I think this can be overlaid on most asset classes due to the fact that bubbles are generally the result of human nature, and thus quite generic.

If you think about this, many commentators think that share markets are in a bubble in the US, whilst others think they are fully valued or fairly valued. My point is that they can all be correct as a stock index is made up of many individual Company stocks, and some may be in a bubble, some may be fully or fairly priced …………………….. and some may be lagging the market overall and actually under-priced.

I think when people speak of the Australian property market, they are equally confused as some pockets may be overpriced but overall the market is playing catch up for the many years of subdued performance, and some areas are similarly still lagging the market.

Home prices to rise up to 20pc: ANZ

Australian property prices will surge by more than two times average wages between now and the end of 2015, according to a bullish forecast by the nation’s third-largest lender that reinforces concern record-low interest rates could fuel a risky asset bubble.

A day after Reserve Bank of Australia governor Glenn Stevensput banks and home buyers on notice to be “realistic” about future prices growth, ANZ property analysts said the market would rise by as much as 20 per cent.

Unlike previous house price booms, the coming gains may not repeat the past by translating into rapid construction growth, according to the analysts.

Both the Reserve Bank and Treasury are counting on a robust rebound in home building to help fuel economic growth, as the resources investment boom tapers in coming years, and keep a lid on unemployment. 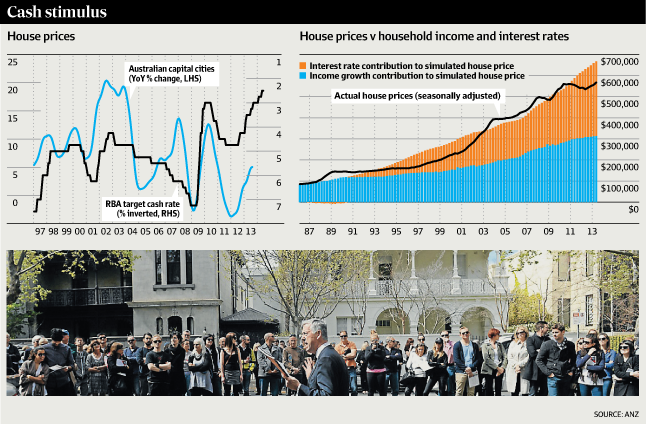 “Despite an unprecedented shortage of physical housing stock . . . and an expected 15 to 20 per cent lift in home prices over the next 2½ years, we are likely to experience the most modest cyclical upturn in housing construction in the past 30 years,” ANZ analysts led by David Cannington said.

They blame rising vacancy rates and “growing valuation risks in some markets” for the likely slowing in the apartment growth.

“In addition, the issues that have plagued the industry in recent years largely remain in place,” they said, listing approvals red tape, excessive developer costs, and shortages of land, infrastructure and tradespeople.

The forecasts came as economists at CommSec published what it half-jokingly described as a “housing bubble index”, which measures the number of times the terms “housing” and “bubble” appeared in newspapers, wire services and ABC radio transcripts.

The index peaked in September at a decade high 194 mentions, they said.

CommSec economist Craig James said the result highlights the “chicken or the egg” nature of the debate.

“Is it the discussion of housing bubbles that causes people to become more hesitant on home purchases or does that discussion merely emerge late in housing cycles?” Mr James said.

The resurgent property market – with prices up more than 8 per cent in Sydney over the year – has received prominent media attention in recent weeks, including last weekend’s record auctions in Sydney and Melbourne.

Mr Stevens is being forced to balance the need to maintain downward pressure on the rebounding Australian dollar against the risk of spurring housing through further rate cuts.

“I don’t think they’d be all that comfortable cutting rates much more, given they’re so far from neutral,” said ANZ property expert Paul Braddick.

Modelling by ANZ suggests wages account for less than half the growth of house prices over the last 30 years – with the lion’s share generated by falling interest rates, which have allowed and prompted borrowers to take out larger mortgages relative to their incomes.

More recently, the research shows the official cash rate at 2.5 per cent has fuelled much of the recent price gains.

Financial markets put the chance of an interest rate cut next week at close to zero. They also imply no change in the cash rate in the next 12 months, according to a Credit Suisse interest rate futures index

What is extraordinary is how much bubbles all look alike. The situations were similar in many ways. In the 1920s, the financial boom was fuelled by new technologies such as the radio that supposedly would change the world. In the 1990s, the stock market rose on the rapid adoption of the Internet. Both technologies were going to fundamentally change the world. Stocks like RCA in the 1920s and Yahoo in the 1990s were darlings that went up like rockets

Anatomy of a typical bubble 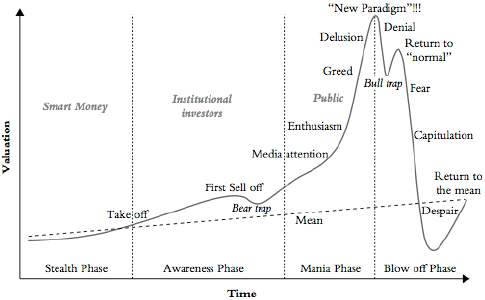 I hope this has been of interest as I’m finding more people asking these questions, but failing to look at the situation in more detail.